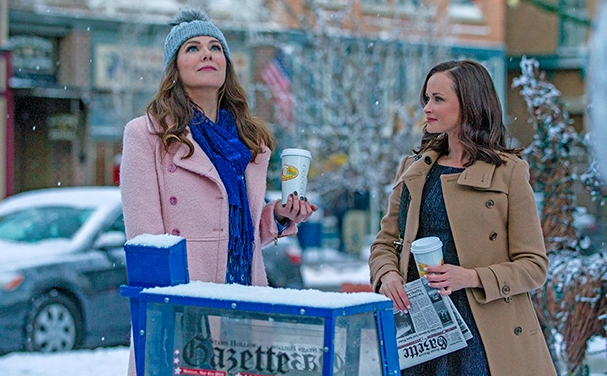 So we know this is super-late, but cut us some slack—they took ten years to get back on the air, we can take a few weeks to process. Of course, we’re talking about the Gilmore Girls re-boot. Gilmore Girls, after all, is so important to us that we used to sneak into the apartment upstairs (where they had a better TV) to watch it.

If we’re being totally honest, Rachel’s had a few months to process this all. Jess waited to watch the new episodes until Christmas so she could watch with her mom. This made avoiding spoilers EXTREMELY difficult. (What is WRONG with you, Refinery29?! Stop posting spoiler headlines that appear in our Facebook feeds! She had to unfollow them just to let some surprises unfold naturally).

We didn’t want to weigh into an already saturated pool of recaps. We really didn’t. But in the end, we had to because a lot of people wrote about their feelings on this and yet somehow, somehow, major points have not yet been addressed. And we feel we have a public duty to set that right.

Things That Made Total Sense for the Gilmore Girls Reboot:

Rory’s Atlantic story being killed for no reason? That happens all the time. Rory clinging to her New Yorker article for years afterwards? Spot on (did you know that Rachel once wrote for Vanity Fair? No? Because she still talks about it constantly. And it was once. And for their website). Being jerked around by Condé Nast even if you were in the New Yorker? Absolutely. Rory nearly landing a book deal that falls through? YES.

So right for Paris. Combine her business savvy with medicine and put her at the top of her game in a cutthroat environment. Very true to her character. Same for Doyle leaving her to become a screenwriter. Also, how dare you, Doyle?

We’re not on board with:

Adult: “How do we…how do we just end this scene and make Rory look like a bad journalist?”
6-year-old: “What if she just falls asleep?”
Adult: “In public? In broad daylight? In New York? While holding her mic?”
6-year-old: “It happened to me once.”
Adult: “Okay. Perfect.”

But seriously, falling asleep in the middle of interview? No. If you’re an irresponsible journalist, you either oversleep and miss the interview completely or you conduct the interview and then you lose the recording by leaving it on the bus or spilling coffee all over it, but you do not fall asleep during the interview.

Unless Rory now has narcolepsy. Then, that’s okay. Unexpected, yes, but okay.

This whole bit felt like a 90s sitcom where the man is dumb and unromantic. And that isn’t Luke at all. He’s a huge romantic under that plaid shirt and baseball hat and new hairpiece. He’s not going to size up women in a catalog and say “Do I get to have sex with her?” No. False. Luke deserves more. We all deserve more. *

We get that this was to set up the big ending, but the final scenes with Logan would have sufficed.

We did like that they at least acknowledged that girls now hike the PCT trail because of that book/movie.

“Who are they?” her dad asked. EXACTLY, Dad. They’re NO ONE. Why do they get such special treatment? Not real. Guys like that do not leave a mark on your life.

Plenty of other things made no sense, but they were heavily addressed elsewhere (the musical? The letter Emily thought Lorelai wrote? Paul, the boyfriend Rory forgets she has? The mystery language of the family who lives with Emily? Why doesn’t Lane get a good ending?).

Actually, no. We’re doing it. We have to address the musical—not even the musical itself, but the fact that Lorelai had a million notes and suggestions and feelings about it. We wanted to believe this meant something. Was she going to become a theater director? Did she find a new calling? She was feeling restless, so a career change made sense. If this was the catalyst for her career change, then the entire musical, and her feelings on it, would have been justified. As in, “Okay, we can watch this musical if it means Lorelai then becomes a director and playwright and begins a new life.”

This did not happen. The musical remains senseless.

But the truth? At the end of the day, we still love Gilmore Girls. Amy Sherman-Palladino created such a funny, warm, world that we’ll always love, no matter how many narcoleptic journalists and irrelevant musicals she gives us.

Taylor does not age.

Lorelai’s hair looks good. Maybe better than it ever did in the original series.

We’d kill for Logan’s flat in London. Fireplace? Huge sofa? Spacious? How? WHERE?

Wasn’t it SO GOOD at the beginning, when you hear all those familiar quotes on the black screen?

It was good to be back again.

Anyway, we’ve been silent for too long! If you want to keep up with what we’re doing, what we’re reading, what’s getting us through semi-terrible times, then subscribe to our newsletter!

And here’s what we’re currently reading:

Rachel: I just finished The Lost Art of Keeping Secrets everyone should read this right now! I loved it! It reminded me so much of I Capture the Castle. You must read!

Jess: I’m reading Fresh Off The Boat, the memoir by Eddie Huang that I found in my house in Texas and it’s making me giggle a lot about how he gags at eating macaroni and cheese and tuna fish salad as a child and writes, “I thought to myself, these white people really like mushy food.”

*Jess got into a Twitter fight with three women who were watching Gilmore Girls for the first time and they were all in love with Christopher and saw no appeal in Luke at all.