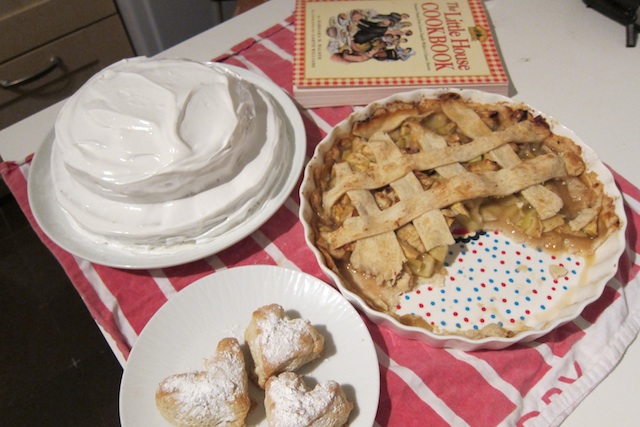 The cakes were too pretty to eat. Mary and Laura just looked at them. But at last Laura turned hers over, and she nibbled a tiny nibble from underneath, where it wouldn’t show. And the inside of that little cake was white!
It had been made of pure white flour, and sweetened with white sugar. – Little House on the Prairie, 1935

The cakes were wonky and lopsided, but still very charming. Jess and Rachel urged their British friend to eat one.
“Go on. Try them. We don’t do this for just anybody.”
Poppy nibbled a tiny nibble from underneath. “What kind of cake is it, again? Sugar biscuit?”
“Lard and buttermilk.” Jess said. – Tiny Flat in London, 2014

Happy birthday, Laura Ingalls Wilder! Today she would have been 147. That makes her an Aquarius, which means she is altruistic, practical and ahead of her time (figuratively and literally). It also means that she can be somewhat cut-off emotionally and a bit of an eccentric. But, because she’s got that famous Aquarius charm, we can’t help loving her anyway.

In honor of her birthday, we’ve baked the frontier version of white cake over at The Hairpin. We also couldn’t resist trying our hands at one of her favorite childhood treats: buttermilk and lard cakes.

Of course, that’s not what they’re actually called, because if were, nobody would eat them. Officially, these cakes are also known as “heart-shaped cakes” and we found the recipe in The Little House COOKBOOK, Frontier Foods from Laura Ingalls Wilder’s Classic Stories. Apparently, Laura and Mary were absolutely delighted when they pulled the cakes out of their stockings on Christmas morning. Let’s see if we will be equally delighted with the result.

Preheat oven to 425 degrees Fahrenheit (or, alternatively, do as the Ingalls family did and place your hand inside the oven to test the heat – if you can count to 20 without burning your hand, it’s not hot enough (if your hand burns before then, immediately run it under cold water and delight in the fact that your stove is hot enough).

In a bowl, mix flour, sugar, baking soda and nutmeg.

Now here comes the hard part, also known as the lard part. Rachel was bribed into this because I promised her delicious heart-shaped biscuits at the end of the process. Apparently girls from Wisconsin (like Laura Ingalls Wilder and Rachel) will do anything for one of these suckers, even massaging lard.

Lard is easy to find inside a supermarket chain in London (where we currently live) and significantly easier than what the Ingallses had to do: butcher the pig and then boil it.) With cold fingers (dipped in cold water and dried), rub the cold lard into the dry ingredients. This was Rachel’s job, as she had earlier cold rolled the lard into the apple pie crust as well. She was becoming something of a lard crust connoisseur.

Cold fingers seem to be essential to making the lard dough come together – but how did early cooks figure this out? Our theory is that their hands were always cold because it was the 1880s (and seemingly always a bleak cold winter in these books). When central heating came around, it was already an engrained tradition.

Make a small pit in the dough and then pour the buttermilk into it. Buttermilk has one of the sourest smells in the world, so if you want to complete this step, we advise you not to smell it. Now, work the dough with one hand so that it can be rolled out. (Not sure what you are supposed to do with the other hand during this time, so use your imagination!)

Dust the rolling surface with flour and then shape the dough into a ball and roll it out into an 8 inch circle. With a knife, create six equal wedges. Shape each wedge into a heart.

Ma Ingall must have been better at shaping these cakes into hearts than we were (and why shouldn’t she be? She could also pluck chickens, churn butter and make her own pork crackling). The book says the cakes were “too pretty to eat.” Our cakes did not have this problem. We shaped them as best we could and hoped for the best.

Grease baking sheet and place “hearts” on it. Bake for 15 minutes until cakes are puffy and browned. Remove from oven and immediately sprinkle with sugar, so the crystals melt and stick to the surface (we used powdered sugar, as it is prettier and tastier than granular sugar). 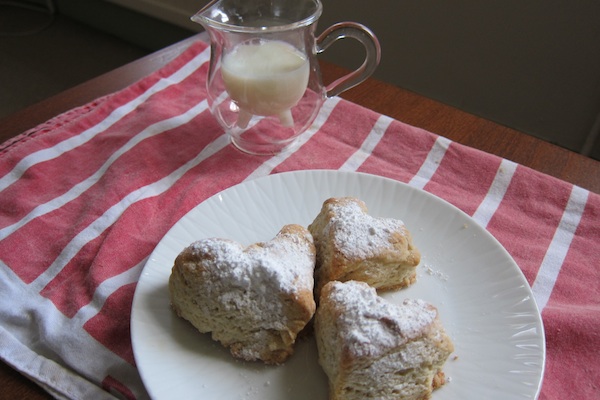 “Heart-shaped cakes” is a euphemism for lumpy chunks of dry dough. Because the Ingalls did not bake this treat with eggs or baking powder, the cakes were less like cakes and more like biscuits coated in powdered sugar (Gwyneth Paltrow’s worst nightmare).

After careful examination we have decided that these cakes are the pioneer’s version of the Poptart – a heavy pastry that causes children’s hearts to rejoice.

To make the most out of your lard and buttermilk biscuits, we recommend that you add strawberries and whipped cream. The cakes will soak up the juices, creating a version of strawberry shortcake.

Whatever you do, please don’t stuff them into someone else’s socks as a gift. Unless you then want to go beat that person with said sock. In that case, it would probably work pretty well.

Happy Birthday, Laura Ingalls Wilder! We have six more weeks of winter ahead of us, but we have your starchy cakes and spicy pies and lard biscuits (as well as tales from life on the prairie) to keep us warm.