Right after I finished taking my last final before winter break during my junior year at Brown, I stepped out of Sayles Hall. It was snowing heavily as I walked across the Main Green, and I spotted a guy from my dorm, bundled up in a puffy jacket and gloves. I shouted, “SEE YOU IN NINE MONTHS, JEFF! IF YOU NEED ME, I’LL BE IN AUSTRALIA WHERE IT IS SUMMER!!!” ** 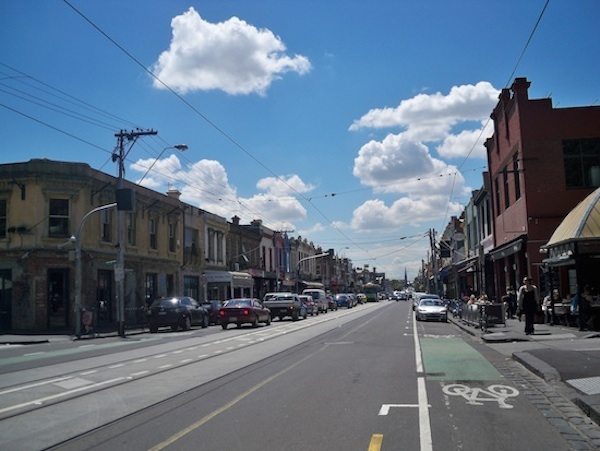 And a few weeks later, I flew into brilliant, blinding sunlight and landed in Melbourne. Not many people outside Australia seem to know much about Melbourne, although its reputation for culture, coffee (the biggest coffee snobs in the world), and music has begun to make its way further north.

As you may know from the book, I actually end up spending more time in Melbourne than I had ever imagined, but I’ll leave those bits to the book. Here are some of my favorite spots for when you visit Melbs (number 1: always shorten every word to fit in with the Australians. McDonalds is now “Maccas” and Facebook is now “facey.”). And don’t just skip it for Sydney! Just don’t. That would be rude. And without further ado, here are the best Melbourne travel tips, tried-and-tested by me. 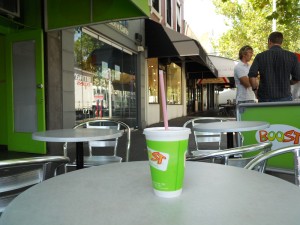 1. Find a Boost juice bar (they are all over the city, but I frequented the one in Melbourne Central station and the one on Lygon St)  and order the All Berry Bang. You will not regret this. A friend of mine used this as a code to describe climaxing. That’s how good it is. It is icy and viscous but not too sweet and not too sour. It is the Goldilocks of smoothies. I have literally travelled the world and I can tell you this now: you will not find better.

2. Ride trams to get around (it’s the easiest way). Get a ticket at the little machines at stops or from stores. If you ride without a tram ticket and you get caught, you will be fined A LOT of money (212 AUD, 186 USD or 113 GBP). But you’ll rarely get caught? Up to you. If you see the tram inspectors get on and you’ve been riding free, RUN FOR YOUR LIFE. (I tried to escape once and they stopped me and I had to plead American ignorance. I got away, but my friends were not so lucky.) The trams also make this great rumbling sound all over the city.

2. Find Fitzroy (a suburb in the city. It is not far. Don’t let the word “suburb” put you off). Take the 86 or the 112 tram to get there. When you reach Brunswick St, pull on the string in the tram to let the driver know you want to get off.  Find an outdoor cafe (they are everywhere), a nice book, and order the best coffee of your life (perhaps a flat white? it’s a stronger, smaller latte). Stay there. Don’t move. It’s going to be so nice. You are going to be so happy there. I wish I were you right now, I really do. If you do get up, there are also great bars, music stores, and fashion stores surrounding you. This is the Brooklyn or Shoreditch of Melbourne. But don’t say that out loud to the natives. Please don’t embarrass us. 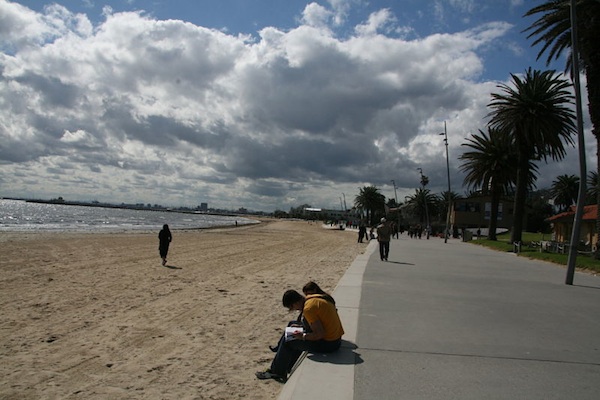 3. St. Kilda is the closest thing Melbourne has to a beach. It’s a bay and there is sand and water, but it’s a little…eh. I mean, it’s okay but you probably won’t love swimming in it (you can, though). But the area around St. Kilda is bustling: cake shops, cool outdoor bars, really nice restaurants, and a great energy. It’s great for sunny days and long lazy afternoons. This is also where I first discovered the only alcoholic beverage that tastes just like juice: Swedish Rekorderlig cider (I like the strawberry lime flavor). Also, you only have to be 18 to drink alcohol in Australia. I turned 21 when I was in Melbourne, but to little fanfare, since I had been drinking the entire time I was there. But I digress.

4. Eat out in Lygon St in Carlton. There’s a big Italian community in Melbourne and you’ll never have felt more wanted in your life until the staff at the Italian restaurants try to woo you with wine deals and compliments. It’s also very cute part of town with bookstores and indie movie theaters. 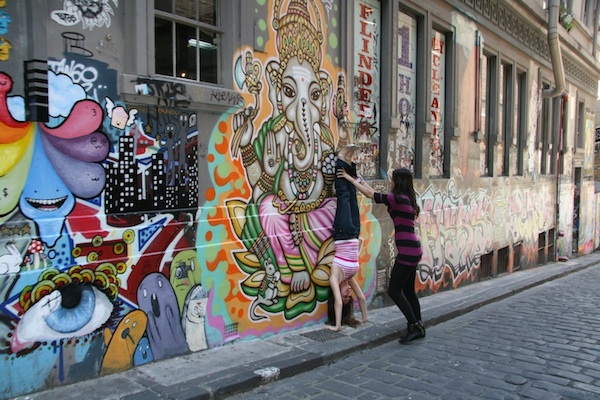 Look how fun laneways are

5. The coolest thing about Melbourne is that it is full of hidden laneways and these hidden laneways are full of cafes and restaurants. Degraves, near Flinders St Station, is crowded but it’s crowded because it’s great. A good place to people watch and to eavesdrop while you’re trying to perfect your Australian accent.

6. Some of my best nights were spent lounging in the Royal Botanic Gardens (a beautiful, huge grassy park) at night while watching a movie projected on a large screen. If you want a perfect date night, this is it, although it’s also really fun with a group of friends. At Moonlight Cinema, you can bring your own food and drinks and settle in. Just as the sun sets, the movie begins. It’s also nice to have that fuzzy, collective sharing experience with fellow human beings also watching the same big screen under a starry night.

But if it rains, you’re screwed.

7. Tennis! Go to the Australian Open in January! It’s not too hard to get tickets (unlike that insane lottery nonsense known as “Wimbledon”) and I got to see Sam Stoser fly through a match and was first introduced to Juan Del Potro (although he lost pretty badly – his wrist was injured). Everyone is complaining about melting in the heat this year, but when I went, it was warm, but not hot. I think my male companion even wore a long sleeve shirt. He did not have a heatstroke.

8. Shop for fresh food at Queen Victoria market (they have a night market, too!) where you can find fruits, vegetables, meat stalls, great kebabs, fresh juices as well as clothing and souvenirs. Most Sundays began with a visit to Queen Vic to get blue cheese, Polish salami and crackers and then ended with a lying in Carlton Gardens or Fitzroy Gardens and lamenting how easy it is to overeat when there is blue cheese involved. 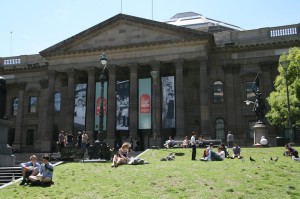 Why go inside the library at all?

10. EAT THE ASIAN FOOD. There is so much good Asian food in Australia (no one tells you this! Why don’t they tell us this? This should be part of their tourism slogan). Get spicy Malaysian laksa (I would stop by QV Victoria and eat at Old Town Kopitiam Mamak because it was convenient, but there are many more places), Vietnamese pho, and authentic Thai food. There’s also a Chinatown in the heart of the city. What else could you ever want? The best restaurant I found in Melbourne? Ginger Boy, a swank place that is inspired by Asian market stall food. It’s hidden down a laneway, so you really feel like you’ve found a gem. God, that place is just so good.

I’m going to stop at ten. That feels right. The rest of my Melbourne observations are in the book and you wouldn’t want me to repeat myself. Wait! Don’t forget to go to the GPO building and eat at Ca Da Vin. I’m still looking for a spicy Italian pasta as good as that restaurant’s. 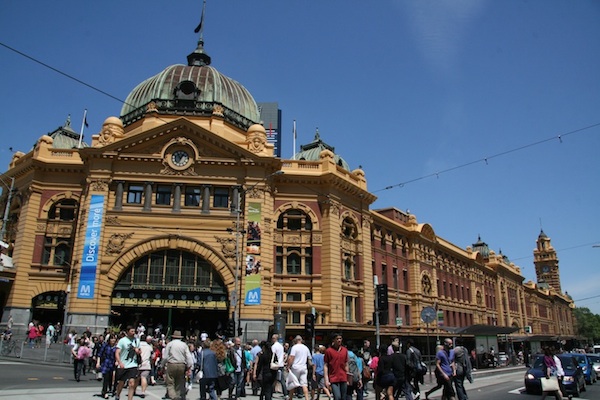 Well, I have made myself very homesick for Melbourne while writing this piece. It’s conjuring up that particular feeling Melbourne emanates: an intimate, buzzy feel that doesn’t feel intimidating at all. It’s hard to get lost in Melbourne and easy to feel like you’re a part of the city because it’s relatively small (compared to giants London and Beijing, my other homes). It’s lovely.

** I would, however, like to point out that it is not always warm — not by a long shot. After shivering from a particularly cold Beijing winter night out, my Australian friend Imogen (a fellow Beijing expat) told me, “You are never going to be colder in your life than when you are inside your house during Australian winter.” She was so right. Central heating is rare in Australia. I bought a space heater and wore two pairs of sweatpants and gloves to bed every night during June and July. Brrrr.