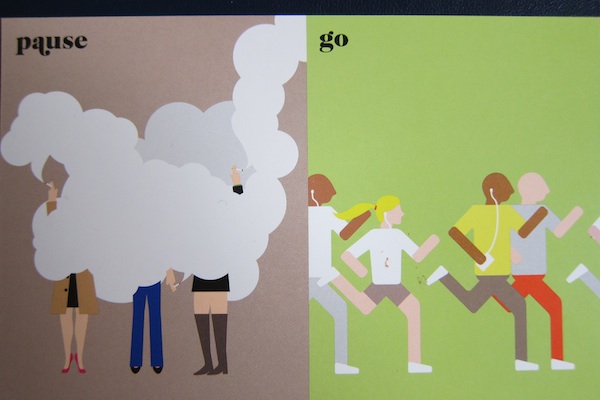 I had the pleasure of watching Cooky run the Paris marathon last April — and what a pleasure it was. It was early enough that drunk Parisians who had not yet made it to bed stood on the sidelines shouting with me. Just me and a bunch of drunk old French guys, who were very amused at the runners.

I stood near the Bastille, searching for Cooky as a stampede of men – all spitting and grunting – stormed past and then he waved me down, because I had failed to spot him in the sea of other men (fact: the Paris marathon is 70% men. Single ladies – this is the marathon for you!).

In the excitement, I ran with him for about 50 meters, which is as long as I could keep up with his blistering pace (he finished in 3 hours). After I waved him off, I sat in a cafe eating croissants and drinking coffee, so everyone won.

But this year, he’s running the London marathon (today! today! today!). He’s asleep right now, but I can already tell the bonuses and cons of this marathon. New York is actually not included in this because Cooky tried to run it in 2012 – and then Hurricane Sandy happened (and the marathon was canceled).

Pros:
– in Paris, so everything is beautiful and charming
– the race isn’t that crowded so it’s very easy to spot particular runners
– France is the BEST place to carb-load (Four baguettes? Don’t mind if I do…)

Cons:
– in Paris, so everything is also dirty and covered in urine
– lots of aggressive French men spitting and shoving each other the entire time
– drunk hecklers

Cons:
– way too crowded – cannot find the person you are looking for
– always the likely chance of rain
– could never win, as the world record holder, the course record holder and Mo Farah are competing

The winner? Too close to call. I declare this round a tie.

Meanwhile, I’ll be swapping the croissants for scones and clotted cream.