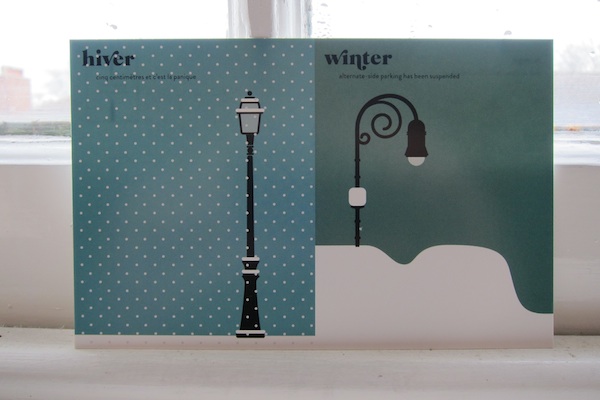 Snow in Paris is rare, but when it happens, it’s magical. You get a light dusting; anything more than that, as this postcard probably implies (“Five centimeters and it’s panic”) and things shut down. Buses take forever to come, it’s slippery inside everywhere, and everyone declares that this is the “coldest winter Paris has ever seen” (hint: it’s ALWAYS the coldest winter Paris has ever seen, according to Parisians).

Pros of snow in Paris:
– Magical
– Looks like a snow globe
– Guaranteed conversation starter
– Good to kiss in because it’s not too heavy
– Will make you look like a halo-d snow angel when you come in from the cold

Cons:
– I have never seen a pair of snow boots for sale in Paris. Never.
– Nobody knows what to do with it so it just sits there
– Turns to slush almost immediately
– Slippier than snow in other places, for unknown reasons
– Your hair will be wet a lot

Winter in New York guarantees you at least a few snow days. Unless you work, in which case, it guarantees you perhaps one snow day and about 4,234,344 of trudging through knee-deep snow and wearing wet jeans or trousers for the rest of the day.

Pros:
– Seeing kids sledding is awesome
– Lots of hot chocolate vendors to choose from
– A feeling of “we’re all in it together”
– Two words: Central Park
– A possible snow day

Cons:
– Workaholic bosses mean the rest of us still have to go in, despite the fact that there is six feet of snow blocking the door to your apartment building
– Wardrobe malfunctions, as per above
– The subway smells 10,000x stronger, as it has been made wet by the snow — and then heated.
– Hearing this question fifteen times a day: “Cold enough for you?”
– Trying to catch a cab in blizzard-like conditions

No matter where you are, snow is magical, quickly turning into terrible. If you had to choose, where would you rather be stranded: Paris or New York?

Sadly, we live in London, where it does not snow, but rains for days. Enjoy your current snow, New York City! Over the pond, we sit and stare at the rain and hope for the fairy-like snowfall promised to us by movies like Bridget Jones. But mostly, we wait in vain.*

*Although today it is sunny and bright, so London might actually win this round.