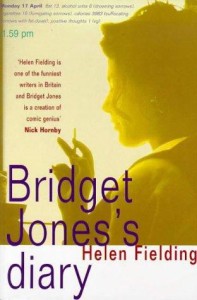 Okay, I didn’t actually get to sit down and talk to Helen Fielding one-on-one, just us, just two ladies discussing Bridget Jones, one of the best fictional characters ever. Instead I attended her book talk in London for the third Bridget Jones book, Mad About The Boy.

However, I did get to meet her and the encounter went like this:

Me: I forgot to bring my Bridget Jones books! Would you sign my notebook? It’s the lesser known Jessica Pan’s diary.
Helen Fielding: Of course!
(signs book)
Helen Fielding: You know, you look like Reese Witherspoon. Sometimes you just look at people and they remind them of someone.
Me: The Chinese Reese Witherspoon? You look a little like Kelly Ripa to me.
Helen Fielding: Oh. Oh. Hmm.
Me: She’s really pretty! You looked like her from faraway. She’s a TV personality.
PR Girl from Out of Nowhere: Yes! She’s pretty!
Helen Fielding: Maybe I was thinking of Kathy Lee…I don’t think I know Kelly. 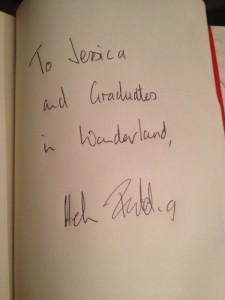 And then the PR Girl ushered me away. So that was it. My 30 seconds with Helen Fielding. In person, she is very eloquent and funny, has beautiful hands, and wore red stilettos (from Zara!).

When I walked in, I asked someone who worked at the venue, “Where is Bridget Jones?! I mean, um, Helen Fielding.”

Here are some select quotes from her on the night (some slightly paraphrased):

On why she decided to write a third Bridget Jones book after so long: I don’t decide to do it. I didn’t plan to. I care about the character too much, and I didn’t want to just keep churning them out – she’d become a parody of herself. But I started writing and didn’t tell anybody. I recently saw it in my calendar about 18 months ago where I wrote “Maybe I should write a third book.”

On technology: I think Twitter and texting are a brilliant thing for writing because they make people creative and force them to be funny in a short space of words.

On the column that led to the books: Someone once wrote a letter to the Independent that said, “Dear Sir, I’d quite like to shag Bridget Jones. Many thanks. Yours faithfully.” I think it must’ve been about the photo next to the column. It’s actually of a secretary at The Independent.

On the diary entries: It was all an exaggeration. You couldn’t think someone eats so many calories or drinks so much alcohol – you’d die!

On gender divide: At the time Bridget Jones came out, Fever Pitch by Nick Hornby was also out. At university, I kept these diaries that would say: 9 stone 3; Carrot: 15 calories, yogurt: 50 calories, box of milk tray: 4,000 calories. And Nick Hornby was categorizing the outside world – whether it was football stats in lists or listing his favorite things – he was putting order to the world outside. We both make order out of chaos and women focus more on their inside lives.

On WHY SHE KILLED MARK DARCY: I didn’t kill him! He’s a fictional character! Jane Austen is my heroine. She doesn’t write about married life. I can only write about Bridget being single. Mark Darcy would never leave her. It’s completely out of character – he wouldn’t leave her with two kids. It seemed more natural for him to live on this way. It would have been odd to turn him into some fuckwit.

On the love interest in Mad About the Boy: I fiddled with it a lot. I had it where you couldn’t tell for ages. Then I went back and adjusted him to make him hotter. I hotted him up and made him like Daniel Cleaver.

On influences: “The Sound of Music” was very influential in my life. With Captain von Trap and Maria – you have the buttoned-up man and the woman full of joie de vivre and she challenges him and it’s very seductive.

And with Darcy and Elizabeth, you know, he’s told to ask her to dance and he says she’s not pretty enough – that’s the way Mark Darcy, when he’s told to ask out Bridget, he says he doesn’t want to date some smoking, drinking 30-something with verbal diarrhea. It’s the pattern: he’s rude, she’s cheeky and they spend the rest of the thing redefining their life together – and then they’re off! They agree they both need a little bit of each other.

On writing sex scenes: A long time ago I wrote one and I faxed it off to a friend and he started quoting bits to friends and I didn’t write one for a long time.

I was worried about what my mother would think. I think she’s getting into trouble with the ladies at church. One of them asked her “Have you got a toy boy?”

But I thought I’d put a little bit in, spice it up – people do have sex and it’s all very natural.

On writing comedy: I write funny things down that I hear but if it’s a comic scene, that takes a lot of crafting because it has to have a beginning, a middle and an end. You have to tinker with it. 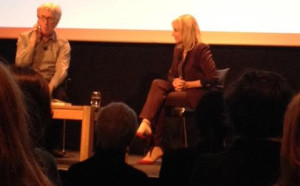 Helen Fielding, who does look like Kelly Ripa in profile

On Bridget Jones being a fumbling person: People say Bridget is this clumsy person, but there’s always something true and painful at the bottom of it. With the blue soup incident, there’s a gap between what you feel expected to be and what you are. Bridget wants to have Michelin food and a concentration of taste and orange and sugar but then ends up with blue soup: that’s not just clumsy – it’s bigger than that. We’re surrounded by TV chefs, and we can’t just make a shepherd’s pie anymore.

On the tone: The diary is a way you talk to your friends. You tell each other the things that have gone wrong and laugh about them and have a drink and make each other feel better. You support each other.

On self-help books: I think that self help books are replacing organized religion in the Western world. My first self help book was Going For It by Viktor Kiam, of the Remington shaver. I was about 12 when I read it and I think it had a big effect on me.

On now: I’m not sure I could write about Bridget being an 18-year-old girl now because I can’t imagine that world.

On her writing choices: It’s a novel; she’s a fictional character. People have their own ideas about her and what she should do. People ask, ‘Why did you write about this sort of thing?’ Well, my first book was about a refugee camp in Sudan and no one bought it!

On tragedy and comedy in writing: Painful stuff happens in life but people deal with it, with their friends.

On Bridget and Mark: I have written the wedding of Bridget Jones and Mark Darcy – but trust me, it would bore you. It’s important to know where to end a story.