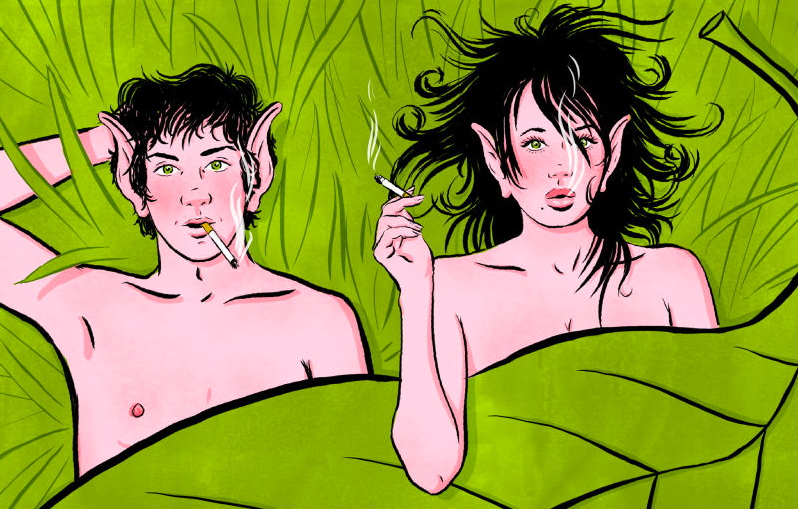 I went to elf school in Iceland and wrote about it for Jezebel:

“Every time I see a local ripping off a tourist for some ‘authentic’ experience, I think, ‘Who the hell is going to fall for that?’” Dylan, my ex-roommate, remarked a few months ago over breakfast. “And then I think, ‘Oh wait. There’s you.’”

“You paid money to shear a sheep in New Zealand,” he replied.

“So what? That was a great experience,” I said. (It was disgusting.)

“You’re the kind of person who would pay money to see the ‘fairies’ on Ireland’s marshes,” he insisted.

I couldn’t resist the pull of elf school.

Elf school in Iceland costs $48. This would be a steal if you walked out of the classroom transformed into a full-fledged elf; however, nearly $50 to listen to a non-elf tell you about Iceland’s so-called “hidden people” does not seem like a great tradeoff.

Infamously, 54 percent of Icelanders are said to believe in elves. (Icelanders protest that this ‘fact’ originates from a very carefully phrased question which asked, “Can you be 100 percent sure that elves do not exist?” Logically, 54 percent of them concluded that just because they have never seen an elf, that doesn’t mean that elves do not exist).

Before I attended elf school, I spent two weeks driving around Iceland looking for elves with my husband Sam, reveling in the 24-hour daylight that occurs during the height of summer. This meant approximately 12 extra hours during which I could be on the lookout for elves. Finding none, however, I turned to the locals for some insider knowledge.

Somewhere off The Ring Road, we stayed at an Airbnb house that belonged to a blond, burly Icelander named Börkur. In his early 20s, Börkur liked to drink and chew tobacco. His English, like most Icelanders’, was excellent. After he let us into his apartment, he crossed his arms and leaned back against a wall, eyeing me up warily. When I asked about the tattoo of a ram on his arm, he explained that he’s an Aries.

“Really?” he asked, his icy demeanor breaking. “That’s cool. That’s really cool.” He looked at me with approval, until I blurted out:

“Do you believe in elves?”

The look on his face showed that I’d lost all the points I had gained by being born in March. “No,” he said, sighing.

“No, but the woman next door thinks they live in a rock on the hill.”

Over the course of our 14-day road trip, I found that elves and “hidden people” (or huldufólk) are always spoken of together and the terms seem to be interchangeable, representing supernatural Icelandic beings (apparently they exist elsewhere, too, but the rest of the world is too jaded to see them). According to lore, they’re people just like us—we just can’t see them. To them, we are the hidden people.

That’s a little too convenient, even for me. I have two older brothers. I know how these things work.

For the rest of the article, go to Jezebel.

GRADUATES IN WONDERLAND is an epistolary memoir about two friends who document their post-college life while living in Beijing and Melbourne (Jess) and New York and Paris (Rachel).

We think it’s the kind of book anyone who has found themselves searching for the right career, the right partner or even the right country would enjoy (plus there are so many strange stories from Beijing, Paris and Australia buried within our letters).