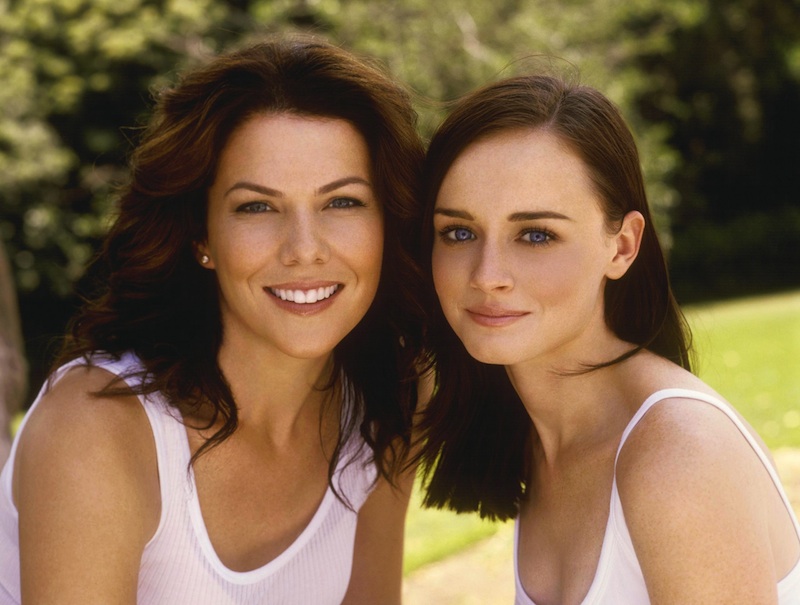 Your best friends, and ours, too

In case you were wondering about the best thing that’s ever happened to us, it was when Gilmore Girls creator, writer and producer, Amy Sherman-Palladino called us up and told us she loved Graduates in Wonderland and wanted to make our book into a movie. Okay, so that’s not technically a GG movie, but it might be the closest we ever get. She’s basically our hero. Amy SP sounded just like a real life Lorelai Gilmore on the phone, she was very kind, and she was very funny.

See, the first week of our freshman year, we discovered that we were both very big fans of the show. Our obsession sometimes reached questionable heights; for example, during our senior year, we would sneak upstairs to watch Gilmore Girls in someone else’s apartment because our TV didn’t work. The tenants of the above apartment (luckily) had no idea. But we wouldn’t have cared if they did. That’s where we were at in our lives — breaking and entering to get our fix of Lorelai and Rory.

But big news broke a few weeks ago, and shall forevermore prevent us from committing misdemeanors in order to watch the best show of our lives. As of October 1, Rory and Lorelai will be available 24/7 on Netflix for your viewing pleasure.

Just knowing that fact (and possibly having it marked in your calendar) is just one of the signs that you’re obsessed with the show.

But there are many others:

1. You eye up every single diner owner you meet in the hopes that he might be a witty curmudgeon with whom you will exchange emotionally-charged banter. You are also certain that he will be the love of your life.

2. You shout, “Coffee, coffee, coffee!” at baristas and are genuinely surprised when they don’t get the joke.

3. You walk around adding the soundtrack of the show (yes, the poignant notes of Sam Philips singing “la la la” bit) to your real life. This means that as you watch your crush walk away, or as you move out of your apartment and close the door for the very last time, “la la la” runs through your head. It just makes everything more significant — but beyond that, you just can’t help it.

4. Whether or not somebody knows who Amy Sherman-Palladino is has become your litmus test for new friendships. She is the writer and creator of Gilmore Girls, which is the greatest thing that has ever happened to television and what she says is gospel. Accept this. Or get out.

5. When a cute guy walks into a bar or a party, you and your best friend immediately turn to each other and classify him as a Jess (moody and dark), a Logan (rich and cocky), or a Dean (nice but dumb).

6. You try to explain the show’s appeal to the men in your life, but they never get it (“Is it a comedy or a drama?” “Why so many references?” “Why do they talk so fast?”). We don’t know — why are you TALKING through our favorite TV show?! We just missed a reference about a 19th century Irish playwright and it’s all your fault.

7. You got bangs. Well, to be more specific, you got bangs when you started watching Season Five (you know, the year that Rory interns at a newspaper and drops out of school and… gets bangs).

8. You know that April was the worst character on the show, but you watch her episodes anyway. That’s love. For better or for worse, right?

9. You applied to Yale. Sure, it’s a good school and a part of the Ivy League, but we all know the real reason why.

10. Your back-up plan in life is to leave everything and open an inn in Connecticut.

12. Sometimes you find yourself worrying about how Rory must be doing now that Obama’s approval ratings have plummeted so much.

13. You’re always calculating how old your daughter Rory would be by now if you’d had her at 16. (Ours would be 13! We have only three more years to achieve Lorelai Gilmore’s witty level of banter).

14. Your high school boyfriend will always fall short in comparison to Dean because he didn’t build you a car from scratch.

15. You think that the best way to work out your aggression towards your best friend/nemesis is through fencing.

16. You think it’s socially acceptable to literally run away when a guy tells you he loves you (like Rory in Season One).

17. You’re genuinely surprised that when you subsist solely on Chinese food, donuts, cheeseburgers and coffee, you aren’t Gilmore-Girl-sized.

18. You actually think attending mandatory Friday night dinners with your family is a perfectly acceptable prize to be exchanged for school tuition.

19. When you try to explain to someone why you haven’t dated your platonic male best friend, you say, “He’s my Marty.”

20. You’re convinced you can smell snow on its way.

21. You think it’s perfectly acceptable to make public declarations of love inside grocery stores (Rory to Dean), with a rocket (Logan to Rory), or with a giant tent (Luke to Lorelai).

22. You hide your music in your room under a loose floorboard even though your parents don’t care that you like Belle and Sebastian.

24. You start referring to that one guy that you see everywhere as “Kirk.”

25. You think the line, “Will you just stand still?” is the greatest sentence ever uttered.

26. After you told your mother about your plans to move to Beijing after your college graduation, she called you up after watching the series finale after Rory graduates from college and cried, “How can Lorelai be sad? At least her Rory’s not moving to CHINA!”(That last one might only apply to Jess.)

Long story short, Hollywood is a tough business, so uh, we’re still waiting on that movie to be made (most are never made, sadly). Want to buy the movie rights? Get in touch!

But to be honest? It doesn’t even matter to us because our hero and the writer of the best show ever read our words and got in touch and now we can die happy.

Meet you at the gazebo in Stars Hollow on Oct 1?

Graduates in Wonderland, is the true story of Jessica and Rachel’s post-college adventures in New York, Beijing, Paris and Melbourne.  Fast friends since they met at Brown University freshman year, they vowed to keep in touch after senior year through in-depth and brutally honest weekly e-mails. After graduation, Jess moves to Beijing while Rachel heads to New York. Each spends the next few years tumbling through adulthood and reinventing themselves in various countries, including France, China, and Australia. Graduates in Wonderland is out now.