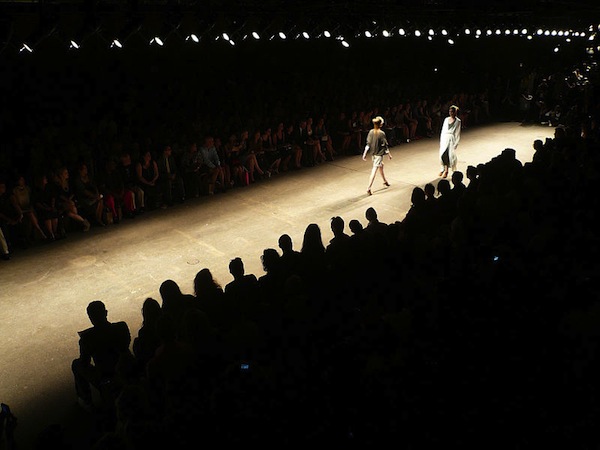 When I was 14, I worked at London Fashion Week, which they do at the Natural History Museum. They have this big tent outside, so all of the big fashion designers are running around inside and all the smaller designers are outside under the tent in stalls.

I was working with my mum’s friend M, who makes these gorgeous cotton pajamas that she gets stitched in India, in a pattern so that they all have the Kama Sutra on them. So they look like really delicate florals, but when you get up close – it’s like, really explicit sex. And I had to man the stall for her.

I was fourteen years old, but I looked like a thirty-five-year-old woman. I had really, really short hair, and I used to dress really punk. I wore a pinstriped suit with a red top made out of sweatshirt material covered in studs and really high heels.

I remember all of the stall runners had to go to this group meeting and after the meeting, everyone just took a line of coke. And then I just had to be at the stall, air-kissing everyone all day. I took to it like a duck to water.

I worked in fashion on and off and then I moved to Paris when I was eighteen — and, oh, God, it was terrible. There was this male friend of my mother’s, T, who was a hat designer, and she put me in touch when him I was there – very much “my daughter would like to get some work experience in Paris.” And he was doing a fashion show with a very famous designer, let’s call her K.

K’s quite an established hat designer, and they were doing this fashion show on the Champs Elysées in one of these old buildings. I was just supposed to go and help out with the show – great, fine, he’s going to pay me some money. So I turned up. And my French was, you know, fine, but not fluent. There’s this mad energy before a fashion show, everyone’s crazy and speaking very fast French, and I didn’t really know what to do.

K is this really intimidating lady, and it was my job to greet people when they arrived and show them to their seats. But, of course, I had not worked in the fashion industry, and I didn’t know who anyone was. I had this list of names but that’s it. There was this camera crew from this station in France – TV5 or whatever – and then there was another camera crew coming from Japan. It was really important that the French camera crew was at the end of the runway, so they got the good shots, and that the Japanese camera crew was at the side of the runway.

The two camera crews arrived at the same time. And everyone was Japanese, and everyone spoke French so I had NO IDEA which crew was which and I had no idea how to ask them, either.

And obviously, I got it wrong.

So the Japanese television had the most extraordinary view, and TV5 couldn’t see anything at all, and it was terrible. I was raked over hot coals for it.

K came over at the end of the show. She didn’t even tell me off. All of her people were like, what is wrong with you, blah blah blah. And she just came over and said, “And who are you?” in French.

I said, “Je suis avec T,” [I am with T]. I didn’t realize that if you said that in France, it means that you’re going out with somebody.

She just said, “Felicitations.” [Congratulations.] And walked away.

I just wanted to kill myself. It was so awful. It was just so dreadful.

Our anonymous fashionista is now an accomplished academic and writer living in London.