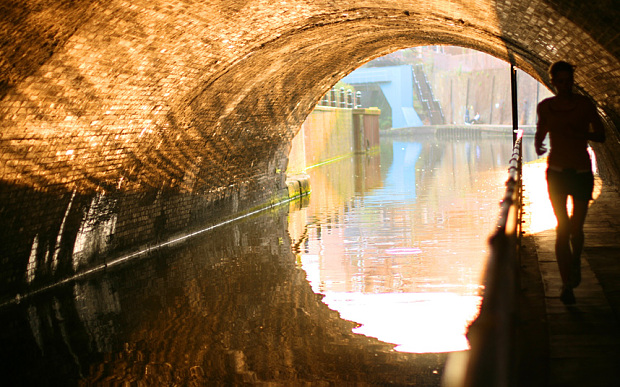 Here’s a post  I wrote for The Daily Telegraph about my training for my first half-marathon in Brighton, England. Don’t expect pro advice, though. I’m just hoping to finish/show up. Here’s how it’s going so far:

Midway through my 3-mile run in London, my lungs and legs feel too heavy to continue and I stop abruptly, breathing heavily and hunched over. I have lost all my former fitness and my running stamina has slid back to zero.

As I try to catch my breath, a cyclist slowly glides towards me. “Come on, girl!” he shouts. “You can do it! High-five!”

My hand reaches out automatically, so used to obeying the high-five command (I am an American, afterall), and our hands briefly touch.

And then I’m off again, invigorated by my own personal cheerleader on Regent’s Canal, possibly sent by what I like to think of as the Running Gods, who step in just as a runner’s will is fading (they can also be thanked for Mo Farah’s final push in his Olympic events, as well as when 40-year-old Jo Pavey won gold at the 10,000m race in the European Championship – and for that time when I ran a 10k race in less than an hour last year).

A reluctant runner at best, I need these moments to spur me on during the tough training sessions. My first big race, the Vitality Brighton Half Marathon, looms in late February, and I’m late to begin my training.

It’s the winter I fear, running on the nights that begin at 4pm or during the cold dark mornings. I shudder at the chill that lingers in my bones in the first 10 minutes of a winter run.

As such, I put off training for as long as possible, always looking for an excuse to avoid it, not least of which is that running is always a struggle for me (probably because I avoid training). It’s a hard cycle to break.

In late November, just when I should be beginning my training, an editor asks me if I’m free in early December to spend four days on a press trip. “Sure,” I say. “Where?”

So just as I was gearing up to really start my training a few weeks ago, I had to break routine and jet off on a business trip to a small island in the Caribbean, possibly best known in England for being the home of athletics champion Kim Collins who became the men’s 100m World Champion in 2003. Crucially for me, St. Kitts is hot year-round.

After a long day out on the road, the other journalists and I return back to our hotel in the late afternoon. It’s humid and a balmy 86 degrees.

“I should run,” I say, thinking out loud about my abandoned training plan. “But it’s too hot.”

A colleague chirps up. “I’ll run with you, Jess. We have 40 minutes before we have to get changed for dinner. Meet you in the lobby in five?”

Damn it. Who asked for a running partner? I try to conjure up new excuses and easily find one. A mosquito-bourne disease was hitting the Caribbean region hard. Chikungunya is a rarely-fatal but serious virus that causes debilitating joint pain, fever, a rash and extreme weakness. Just one mosquito bite can infect you.

I fluctuate between thinking it’s too dangerous to run and risk getting bitten, to looking longingly at the landscape of lush green hills and sea and thinking about how I’ve missed two training runs already.

In the end, I spray myself in DEET and the other journalist and I set off on a quiet road with mild traffic near our hotel.

The blinding bright sunlight and ocean views are the exact opposite of the grey winter runs I’d become accustomed to in London. “Maybe I’ll do better here,” I think optimistically in the first minute. Maybe I’m the kind of person who excels in the tropics. Maybe this is where I’d transform from Jessica Pan into Jessica Ennis. Maybe, just maybe, I am Kim Collins.

We run by shacks and hotels and green fields. We run by beaches and mango trees and sugar crops. In fact, we run all the way from the Atlantic Ocean coastline to the Caribbean Sea.

Okay, so technically our hotel was located where the two bodies of water are only separated by a narrow mile-and-a-half stretch of land near Frigate Bay, but still – we began at the wilder, rougher Atlantic beach and double back when we hit the Caribbean.

In the hot afternoon sun, I begin to wilt. The heat becomes unbearable. The thirst is excruciating. As we approach the last half-mile, I look to the other journalist to see if she feels as exhausted as I do. I want to stop and catch my breath.

Instead she says, “Let’s sprint for the last stretch.”

Perhaps I should have mentioned that my running partner was Kenyan.

In the end, she overtakes me and I join her at the finish 45 seconds later. We are exhausted, panting and dripping in a mixture of sweat and DEET – but we feel triumphant that we finished our run.

Later at dinner, I boast to everyone that I successfully ran with a Kenyan. She looks at me and says, “I may be Kenyan, but I grew up in Norway! It’s not the same thing!”

A few days later and I’m back in cold grey London. In my heavy coat and beanie, St. Kitts feels like a distant dream. A Kenyan-Norwegian? Surely not. I must have made that up. Or was it a hallucination sent by the Running Gods to help me when I was at my weakest?

Yesterday, kitted out in my winter gear, I’m back to running on the canal and I pound out four fast miles, feeling stronger than ever, no doubt because running in the punishing heat has built up my endurance.

Just ten more weeks to go before the race in Brighton – I hope the Running Gods continue to be kind to me. I’m going to need them.

This is my first blog about my half-marathon training. I’m writing it for The Telegraph – so look out for updates! They like to cut out all of the good parts, so I post the unabridged versions here. Follow us here for updates.