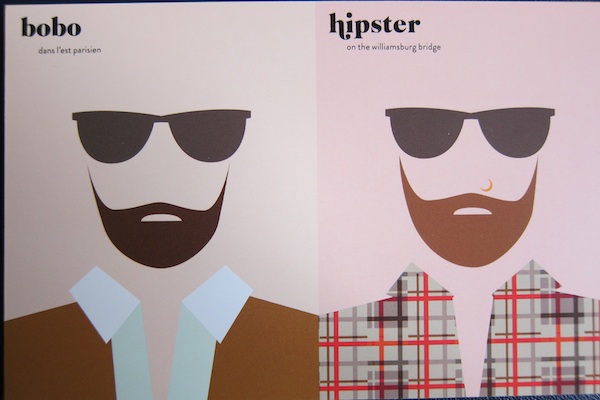 We have to admit: we stared at this postcard for a long time trying to figure out what the difference between a Bobo and a Hipster is. The only thing it made us do is laugh at the word “bobo.”

But, a little digging into the words themselves made things clearer. Bobo actually started out as what we would call hipsters before we, uh, knew to call them hipsters? Back in the late 1990s and early 2000s, these were the post-yuppies, the “Bourgeois Bohemians.” The French adopted the same word, probably because it sounds fun, to mean “bourgeois boheme.”

After a bit, New Yorkers were like, “Wait a minute! These bobos in Williamsburg are NOT ONLY bourgeois and bohemian, but they are also a little bit nerdy, a little too cool, blase, obsessed with the retro, and wear jeans so tight they can’t bend their legs. WE NEED A NEW WORD.”

That word was hipster.

In Paris, though, they just kept on with Bobo. It was fun to say, and the French are not ones for letting go of old-fashioned words they like. (Anyone else learn in high school that they call clubs “discotheques”? Uh. . . yeah.)  And the French Bobo IS slightly more bourgeois than the Williamsburg hipster, as this postcard shows. At least he hasn’t reclaimed plaid.

The postcard is correct that the two beings are, however, more or less the same. But bobo is far more fun to say. Please use it today. Examples: “Tim is SUCH a bobo” or “Get out of my face, bobo!” or “Look at your jeans! Who are you? Lieutenant Bobo?” (We don’t know why all the examples are so hostile, but that’s just the way it is.)

The point of all of this? Your cultural education, of course! And also as a brief reminder that (according to some people) men with beards are sexy. It’s (pseudo)science.