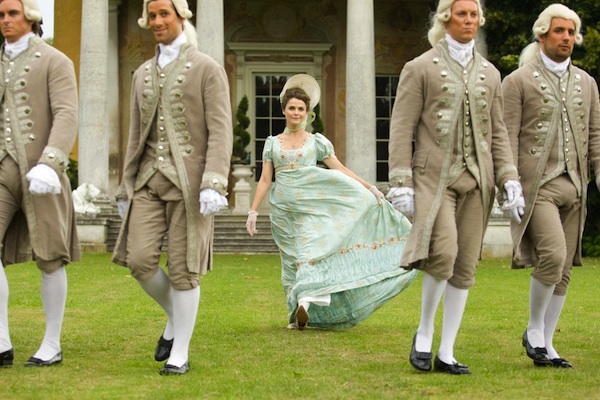 Felicity was one of our favorite shows when we were in middle school (whoa 1998!). Like the beginning of our book, the show begins at a graduation: Felicity chases down her crush, Ben, and then throws away her plans to go to Stanford so she can follow him to NYU. That show was nearly perfect, except for “best friend” Julie, who was not to be trusted. Seriously – when she slept with Ben, she was dead to us. Forever.

Anyway, we’ve missed Keri Russell (and we don’t care what length her hair is), but she finally returned to playing a lovable, dreamy character torn between two men – but this time, it’s in England, there are costumes and the men have accents — all in a movie called Austenland.

The premise seems promising: Jane (of course her name is Jane), a woman unlucky in love and obsessed with Jane Austen’s books, spends her life savings on a holiday to an English estate where everything is from the Regency Era: the clothes, the food, the customs, and the men.

We saved the viewing experience for the DVD (which came out last week) because we were turned off by the bad reviews. Terrible reviews.

We both liked it. We embraced its terribleness. Was there too much farce and bravado and little to no backstory for protagonist Jane? Yes. Were there terrible English accents put on by Americans? Yes.

But was there real flirtation and hints at love? Genuine suspense at who Jane would end up with? Did it entertain us? Yes. Yes. Yes!

Jennifer Coolidge’s character (a fellow Austenland visitor) is ridiculous beyond belief (sometimes in a cringe-worthy, how-did-anybody-find-that-funny kind of way) and her impersonation of a British accent which quickly turns into unintentional baby talk is grating and…yet by the end of the movie, it was downright amusing.

There are also a million little jokes that just happen without being dwelled upon or even highlighted. In that way, it has subtlety that every Jennifer Aniston movie lacks. And these guys have charisma.

We felt like we had to write about this movie because it deserved better than those scathing reviews. There were some really good kissing scenes on boats, next to lakes and inside ballrooms. The makeover sequence was hilarious. It is equal to Bridget Jones 2, which means, not as good as the original but definitely worth watching. And Austenland is just as good (actually, better) than the Legally Blonde movies.

Most of all, it fulfilled the deep void we’ve had in our lives ever since Felicity went off air. And there are two distinct horse scenes: one with the stable boy and one with the snobby Englishman, and both are unexpected, strange and amusing.

If you’re into period dramas, farce and love triangles on an English estate, we highly recommend Austenland. It came out on DVD last week – so go watch it and then tell us what you think.

FYI: Jess is in love with Stable Boy Martin and Rachel is love with the Cold English Gentleman Mr. Nobly. This surprises no one.