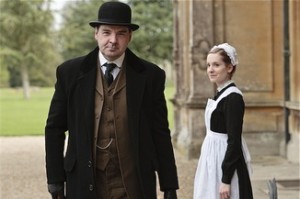 America has FINALLY seen the Downton Abbey episode where a terrible, terrible thing happens and we are left devastated and also wondering what is going to happen to Anna and Mr. Bates. Well, don’t worry! Let’s keep in mind that things happen in Downton Abbey (my favorite reality TV show – those people who still think they live in the Post-Edwardian era! So quaint!) and months later they are broadcast in the US.

Recently, I saw Mr. Bates, with my very own eyes, buying salmon in Sainsbury’s (a grocery store chain in the UK). He seemed totally fine. Keep in mind that things at Downton happen in the UK and then America has to wait a few months to find out about them. Things were bad then, but seriously, he seems fine now. He and I were both just two people, buying fish at the supermarket. He was wearing a peacoat, some jeans, and picking out some salmon. Also, his limp was completely gone.

And if you were worried about Tom Branson, the handsome Irish former chauffeur widower, he is also fine. I saw him walking down Upper St in London. What really happened is that I was with an annoyed male companion who said, “There’s your man,” with disdain. And I looked up to see Tom Branson, taller and thinner than he looks on television, gliding by me, headed the opposite way down the street. But I looked up too late to truly appreciate his beauty! I had to pretend to have to turn around, run past him and then “search for something”, so I could then turn around again to truly see him. It was totally casual, though. I pulled it off.

He was carrying many shopping bags and was accompanied by a thin brunette. I assume the shopping bags were hers. She was probably trouble though, because ever since Sybil died, he’s had atrocious taste. Still, he was so handsome…

Anyway, just saying – Mr. Bates is fine! He’s getting his omega 3s and everything. I didn’t see him with Anna, but he seemed chipper and not incarcerated, so these are good signs.