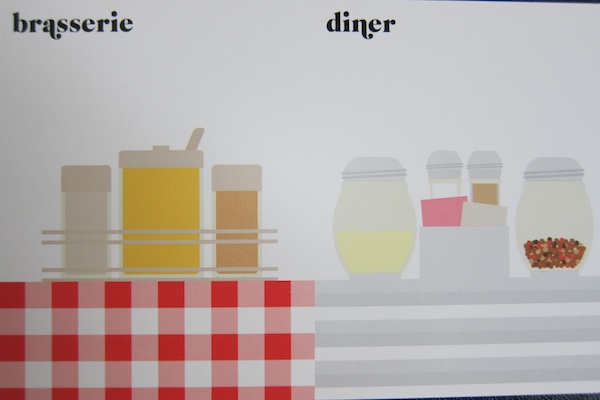 We’d love to regale you with stories of French brasseries and American diners, but the truth is that, when we first took a look at this postcard, we were reminded of things the other way around: American brasseries and French diners.

Is there anything more delicious than an authentic taste of home when it’s been five months since you saw anything resembling a real hamburger? In France, Rachel didn’t think she missed American food, until a friend of hers (waitressing at Breakfast in America, which is, despite its name, in Paris) comp’d her a vanilla milkshake. Combined with her three-croissant-a-day diet, this did nothing for Rachel’s health, but she wouldn’t have traded it for anything else. And especially not some stupid croque monsieur (la fancy French grilled cheese).

But only two years earlier, we’d been in absolute heaven eating French bistro food back in New York, during Jess’ brief stay before leaving for China. Down in the Village, we ate frites and the most amazing, cheesy, delightfully French croque monsieurs you could imagine at French Roast. And, on a recent visit to NYC this past year, Rachel was surprised to find that her friend Josh (from the book) insisted on taking her to the Upper West Side version of this same restaurant.